Worldbuilding and Collaboration: Presented by Carroll County Chapter of the Maryland Writers' Association 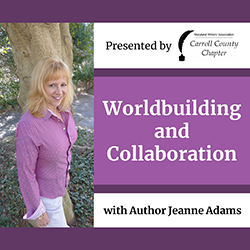 Teens ( 16 - Adults )
Adults
Registration for this event is no longer open.
Allowed Ages: 16 to Adult

Worldbuilding. Shared worlds. Story bibles. Collaborating. It sounds daunting, doesn't it? But with a few simple tricks and tools, you can build your urban fantasy, paranormal, or, a la JD Robb, a just-slightly-ahead-of-now reality without fear. Join author Jeanne Adams as she demystifies these processes so you can create a fabulous new space for your characters to play! This Zoom event will also be broadcast to Facebook LIVE.

Jeanne Adams writes award-winning romantic suspense, fantasy/paranormal, urban fantasy, and space adventure that have been compared to Jack McDevitt and Robert Heinlein. Both traditionally and independently published, Jeanne has been featured in Cosmopolitan Magazine. Jeanne Adams’s worldbuilding skills extend to space stations, distant planets, a fictional English castle, and an entirely fictional town in Massachusetts for her Haven Harbor witches. She’s also collaborated with other authors on stories in space, England, and at an inaugural ball under attack. For more information on Jeanne Adams, visit www.JeanneAdams.com.

Zoom login information will be emailed to participants one hour before the program starts.